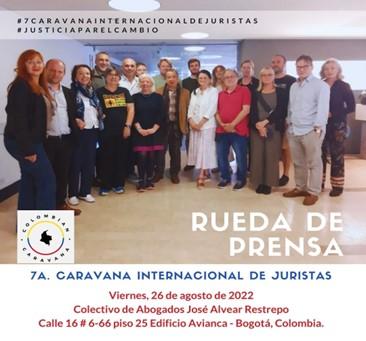 At the end of August 2022, two past Presidents of the FBE, Dominique Attias  (Paris) and Sara Chandler (London) joined FBE Human Rights Commission members Carles McGrath (Girona) Francisco di Nardi (Bologna), and Wout Albers (Amsterdam) in an important monitoring visit of the Colombia Caravana. The FBE has been a strong supporter of human rights lawyers in Colombia since 2006, when the FBE invited a Colombian lawyer to address the General Assembly. There have been several Colombian lawyers since then who have participated in the FBE Congresses.

The visit was made at a crucial time in Colombia, new President Gustavo Petro had taken office at the beginning of August, and the Truth Commission, part of the Peace Accord reported its findings of four years’ work on truth and reconciliation. President Petro has pledged to work for total peace, and was elected on a social justice agenda, after national strikes, and demonstrations in 2021 showed that there was widespread support for change in Colombia. Vice President Francia Marquéz is an environmental activist and lawyer and brings a much-needed relationship with women, indigenous, Afro-Colombian communities.

The Caravana of 18 members met lawyers and the ir cloients, as well as judges and officials of the justice system and heard evidence from them in Bogota,  Bucaramanga, Cali, Cartagena and Cucuta. The testimonies heard told of widespread criminalisation of demonstrators, especially young people, failure to follow due process arrest and detention, with overcrowded and unhealthy prisons and police station detention centres. Lawyers and judges were hampered in their work, and especially cute harassment included TV broadcasts characterising a lawyer as a teacher of terrorism who indoctrinates students. In the northeast of Colombia, close to Venezuela, there is a still conflict zone with 17 armed groups. A local Defensor del Pueblo (People’s Defender) said that there were no go areas where public officials could not enter, and in which the people had no services from the state at all.

In all the regions visited there were testimonies, including video evidence of the criminalisation of political participation in demonstrations, and stigmatisation of lawyers who represented demonstrators, and protestors over land rights. In one particular region, there were judges in prison. Evidence from the regional visits was presented in discussion with government officials in Bogota and will be reported on when the 2022 Caravana report is launched. More information about the Caravana can be found on:  www.colombiancaravana.org.uk